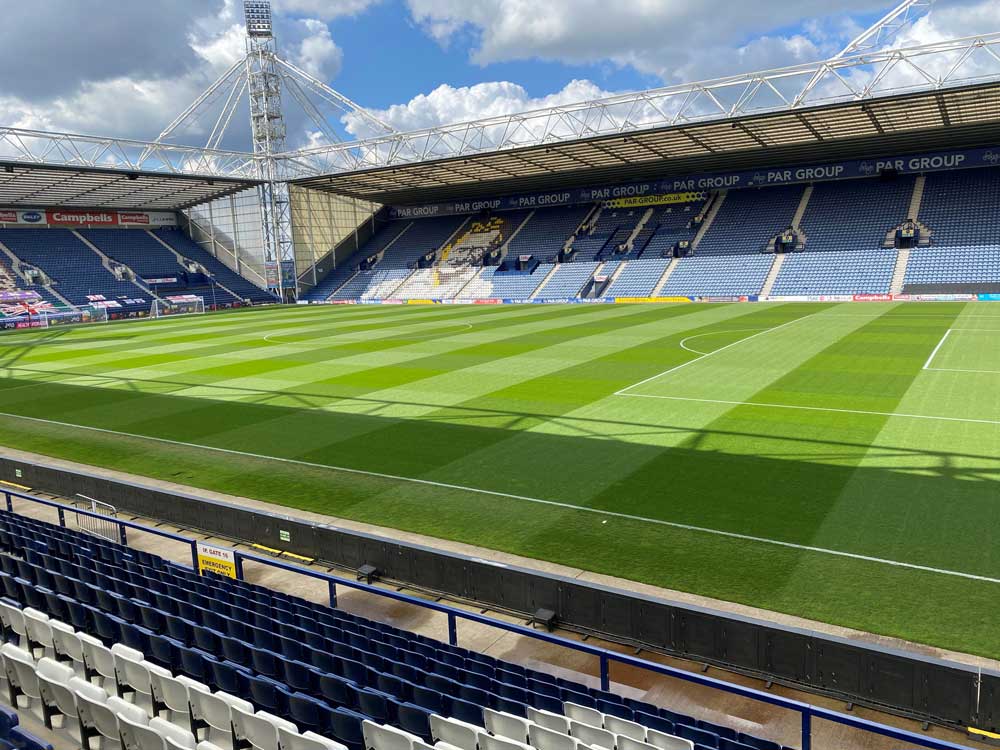 Pete, a graduate of the highly regarded Myerscough College, originally began his career at Blackburn Rovers FC before moving to Preston North End FC in 2005. The award-winning groundsman now oversees 7 members of staff over three sites.

Across those three sites, which includes Deepdale Stadium, the youth academy and the new first-team training centre, Pete has six Fibresand constructed pitches – and this is where Mansfield Sand come in.

“Mansfield Sand were used during my time at Blackburn FC, and I have personally dealt with them the whole time I have been here at Preston North End – the customer service has always been first-class,” said Pete.

“There are two products in particular that we use across the Fibresand pitches we have, and they are incredibly important to the playability of them.”

Pete uses Mansfield’s Fibresand, which is a pure sand and polypropylene fibre reinforcement product that is particularly advantageous when grass cover has been reduced due to heavy usage and wear during the winter period. It is incorporated into an upper sand soil rootzone and consolidated to provide a stable divot-free environment.

“We’ll use the Fibresand during renovations and how much we apply really depends on how much we need,” he said. “Mansfield Sand will usually come and take samples in December to see what our levels are and when we find out what the fibre content is, we will then know how much fibre we need to add. You need to have a certain percentage of fibre to keep that stability in your surface and have the best pitch you can.”

Historically, Deepdale Stadium was the only Fibresand pitch under Pete’s remit, but 2019 signalled the start of more and he has not looked back since.

“We used to have drainage issues on the pitches at the youth academy centre, but that has all changed now.

“I’m a big fan of Fibresand pitches and I like to think I am fairly good at dealing with them in whatever conditions are thrown at us. In the North of England, we get a huge amount of rainfall and the pitches let the water through with no problems at all – that is thanks to the great products from Mansfield Sand.”

Furthermore, Pete revealed that while he relies on Mansfield’s Fibresand for renovations, he will also use the company’s MM40 product.

“We’ll use the MM40 for a straight sand top dressing, especially for the pitches that aren’t having a full cultivation,” he said. “It is a brilliant medium sand and I always try and keep a couple of tonnes left over for goal mouths or any other areas.”

From winter sports pitches, golf courses, bowling greens and all amenity turf areas – Mansfield Sand has a solution for all.